Last week, a state lawmaker withdrew one of his own bills after a harsh response from critics. 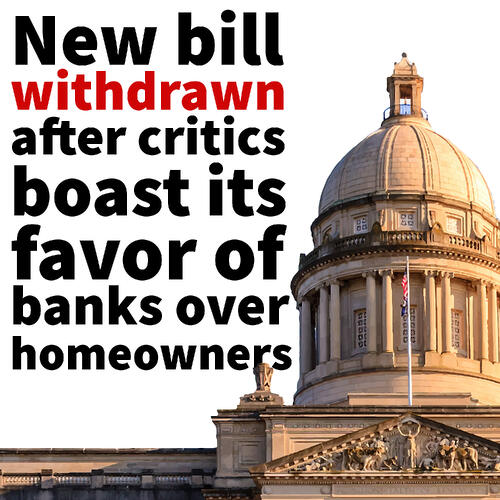 The foreclosure bill, House Bill 407, which was backed by Jeff Greer, the House Banking and Insurance Chairman, would have permitted a quicker and more direct mortgage foreclosure process.

However, the opponents of the bill say that it threatened to favor banks over home owners. They expounded by saying that the bill would force home owners to deal with obstacles such as no longer being able to regain their home by paying the amount owed within six months. Home owners would also be forced to file lawsuits – at their expense – in order to halt a wrongful foreclosure.

“My intention was to give some relief to the banking industry, but I had no intention to hurt anybody,” said Greer, who went on to explain that the overall issue with the bill was the lack of time he had to present it adequately. “That’s what you get for trying to rush a bill through.”

Last year, Greer received a minimum of $9,400 from Kentucky’s banking industry, from both individuals and political action committees, in political donations.

General counsel for the Kentucky Bankers Association, Debra Stamper, said the bill was designed to expedite the foreclosure in such cases where everyone – borrower included – wanted things to be resolved quickly.

Stamper also said that the association has plans to pursue a similar bill in 2016.

Why Refinancing is Something to Consider

The Truth about Forbearance