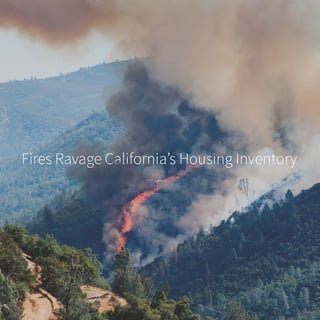 Heartache is inevitable upon looking at the photos and videos of the California fires engulfing peoples’ homes and businesses, knowing that all they can do is watch, helplessly in horror. These fires have left 42 dead and at least $1 billion in damage to insured properties, according to CBSNews. As stated by National Mortgage News, “from a real estate perspective, the disaster is happening in one of the worst-possible places. The area has already been squeezed by a severe housing crunch and escalating values — with rents in Santa Rosa rising the most of any big U.S. metropolitan area in the past five years — leaving few options for people to live while homes are being rebuilt.”

The article sited discusses a family who moved from Vermont a year ago with their pets and new born son. It took them months before they could find a place to rent that could accommodate their needs. Now they must start over again, a year later. Currently, they are living with friends but are considering options, which at this point, include leaving the state.

With all of the natural disasters we have experienced within the last several weeks, many are left asking, “what now?”. Addressing the housing challenges are part of the answer to this question. Unlike Houston and Florida who have active markets for new construction and a surplus of apartments for people to rent, this is not the case for Californians. The rent had already jumped up 50% in the last five years and there was a 77% increase in median home price from four years ago, according to National Mortgage News. On top of that, they also state, “There's little available to lease, with the apartment occupancy rate in the Santa Rosa-Petaluma market at 96.5% in the third quarter, according to RealPage, which considers a 95% occupancy rate essentially full.”  And now there is a decrease in housing supply due to the wild fires.

Many are hopeful that regulations which restrict new construction and make building more time consuming will be considered for reform. One builder commented, "There's the possibility that as folks start to rebuild they do so with higher density and more units".

“It's a sentiment that may play well across the country. The U.S. real estate market isn't adding enough new homes to meet normal demand, let alone react to a natural catastrophe, said Nela Richardson, chief economist at brokerage Redfin. "The housing system can't handle the shock," she said. "Any event, even a big rainstorm that floods out several basements in a neighborhood, something as trivial as that can overwhelm the system."”

Zero Interest: What does it mean?

Equity- What is it? Why does it matter?