The Low Down on Down Sizing

By Kimberly Shane
The Low Down on Down Sizing 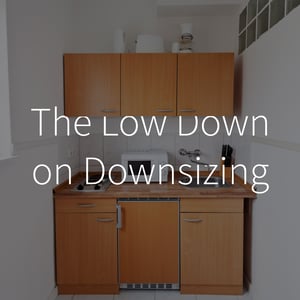 Many are downsizing. As many Americans are aging, they no longer need the large homes with multiple bedrooms and big yards. Their kids have grown and moved out and they are ready to move on. While the result would likely be very freeing—less stuff, less space to clean, less yard to maintain; the process of downsizing could feel like an ominous one. An article found on Realtor.com gives us some key downsizing moves that could be easily overlooked.
The first they mention is waiting too long to downsize. Typically, people wait until there is an event that sets this downsizing plan into motion—a death in the family, an illness; this means that we are trying to downsize during a time of struggle. Instead, try creating a plan to downsize. If your kids are gone and your mortgage is paid off, wouldn’t it be better to move now while you have the strength and energy?
Now to get rid of the items. Friends and family are a great option when finding ways to get rid of furniture. Realtor.com warns, not to give them too long of a leash. Meaning, let them select the items they want but give them a time limit. They don’t get the option to take a couple of months so they can figure out where to put it. Speaking of furniture, the pieces you plan to take with you, are you sure that they will fit? Make sure to measure the items and the rooms to ensure you won’t be disappointed when moving into a smaller space.
There are likely lots of items you won’t need in the newer smaller space like yard gear and all those kitchen gadgets… honestly, when do you plan on using that pasta maker that has been collecting dust? But trying to purge an entire home filled with items can be a tough one to tackle so instead, take one room at a time to go through items. As you go through these items, Realtor.com reminds us not to focus on the stuff that is being lost but instead, focus on the memories and time that will be gained!
If you are thinking about downsizing or moving in general, check out our tips by downloading our free moving guide here: http://info.smcapproved.com/how-to-conquer-moving-day
Source: https://www.realtor.com/advice/sell/downsizing-mistakes-smart-people-make/