When a DIY Becomes a DI Why? 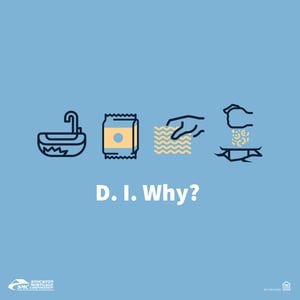 If DIY stands for Do it Yourself, then DDIY should stand for Don’t Do it Yourself. The internet is littered with DIY fails, from elaborate make up to homemade wreaths to ornaments with a pet’s paw print. Some of them are hilarious but some are relatable, albeit still hilarious. What is it that causes a project to become a DIY fail? For me, its when I get a bit too cocky and a little too ambitious; I start thinking, “I can do this. All I need is a little…”—it’s bad news from there. But isn’t that what the internet is great for? It may give you an idea for this “great DIY” project but when you crash and burn, it can provide comfort, knowing you aren’t alone, as you scroll through other’s failures to DIY. That’s what my goal is here. I’ll be that person that you can relate to as you read about my DIY’s that turned into D.I. why’s.

The first one that comes to mind is not one of those hilariously bad projects that turns into a meme and circles Instagram—this one failed because it was a project that should have cost about a tenth of what we spent on it. If it had been hilariously bad, at least we would have gotten a laugh out of it. My husband and I decided we were going to create our own shiplap style wall, you can read all about it here, (pictures included) it turned out great! However, within a couple weeks of wrapping this project up, we read some DIY genius’s blog post on how they installed a paneled wall like ours for under $100.00. Our jaws hit the floor-- we spent $600 dolling up this wall of ours, ugh! What was our problem? I’ll go back to my first statement; we were too cocky. Instead of doing research and seeing what others had done, we set to work right away, taking measurements and drawing up plans. So, the lesson here is in using the internet and other people’s experience for your benefit; see how they were successful or in our case not successful.

A lot of my DIY projects never see the light of day. Some because they are ugly and deserve to live inside a closet (sometimes I think I can draw), but others aren’t ever finished. It’s not for a lack of time, that would be an easier excuse to share here… we are all friends though… it’s because I’m cheap. I get that cocky attitude and a little too ambitious and think to myself, “I don’t need to buy a <insert specialty tool here>, I can just use a hammer, screwdriver, scissors, or some other standard household tool to get the job done.” So, I get excited and into the project only to reach the point where I discover no combination of a hammer, screwdriver, and scissors will help me finish my project. That is when I resolve, it just isn’t going to happen and my lofty goals of making my own hanging pot, tree swing, door sign, etc. end up just that—still a goal. A goal that will remain unrealized until I am willing to spring for power saws and such!

Like me, you may be feeling that unjustified confidence creep in and start thinking, oh yeah, I can DIY that. Well, do yourself a favor and answer some questions that will help you determine to DIY or not to DIY in this blog post.

Tags: renovation, do it yourself